Campaigns were launched in Korea, North America, Great Britain and Hungary to help consumers understand the effects of drinking.

As part of our ‘Society 2030: Spirit of Progress’ action plan, we have committed to educating people on the risks of alcohol-related harm through our global DRINKiQ platform.

A number of countries have run great campaigns, but we wanted to highlight the work from four in particular; Diageo Korea, Diageo North America, Diageo Great Britain and Diageo Hungary. All four countries have launched creative, consumer facing DRINKiQ campaigns to help promote positive choices and encourage people to visit DRINKiQ.com. In these countries alone the campaigns have reached millions of people.

Taking into account that 97% of Koreans own at least one smartphone and Quiz apps have become a popular part of pop culture in Korea, it was decided to use digital as the main platform for a DRINKiQ campaign. A collaboration with two mobile quiz apps was launched to promote the DRINKiQ quiz, as well as activity with magazines and social media sites to raise visibility and reach target consumers.

Both Diageo North America & Diageo Great Britain chose to partner with Buzzfeed to educate people about drinking alcohol. A simple ten-question quiz was published on the Buzzfeed website, with the campaign also activated across social media to target young adults of legal drinking age. Launch dates were strategically timed to coincide with seasonal moments such as the holiday season and Easter.

The Buzzfeed quizzes and social post content provided the perfect format to educate and engage our audience, with the format being a fun and effective way for us to share a responsible drinking message and encourage visits to DRINKiQ.com. 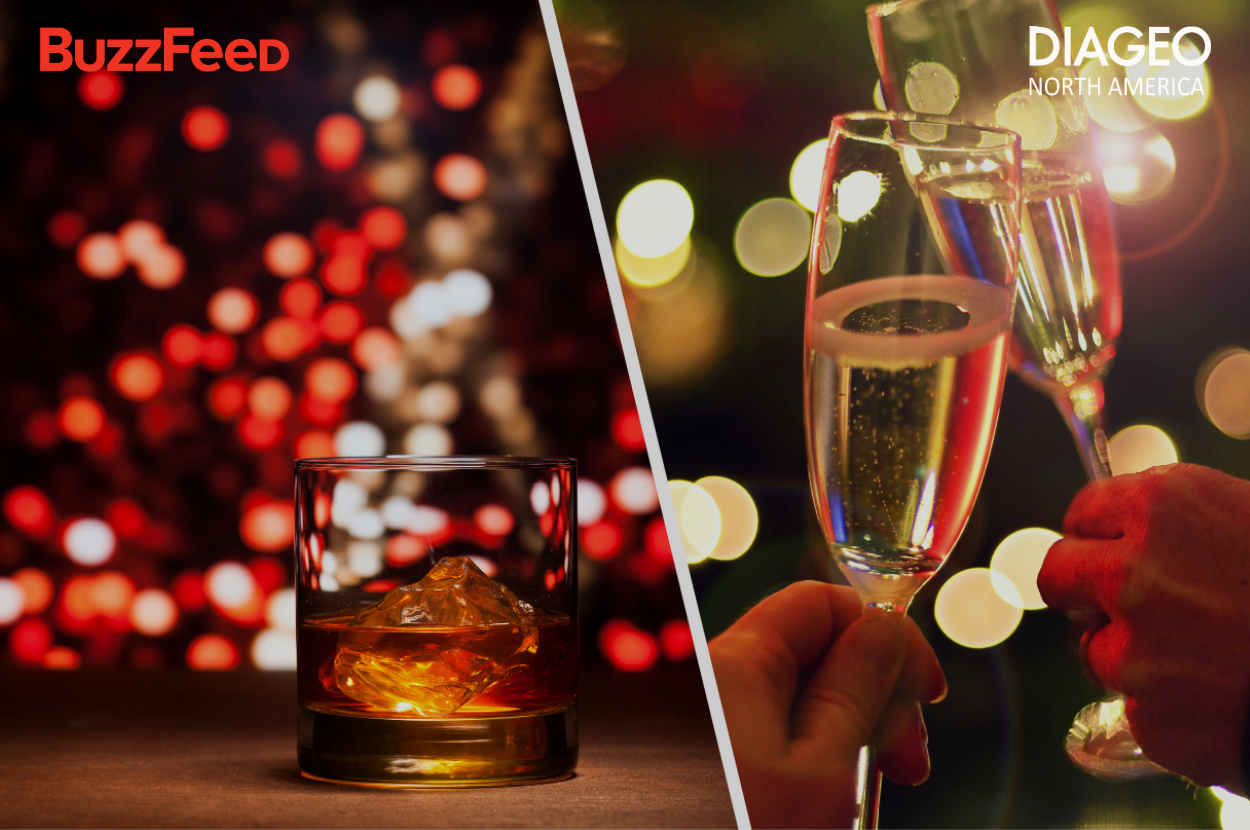 Diageo Hungary joined forces with a famous local band called Margaret Island to host a free virtual concert which debuted a new song, with access granted by completing the DRINKiQ quiz. Distribution partner Zwack and the National Accident Prevention Committee joined the campaign and Diageo Budapest’s 1,400 employees acted as Brand Ambassadors, amplifying the campaign through social media channels. The concert was promoted through articles and media interviews, as well as social.

Over 10,000 respondents completed the DRINKiQ quiz with more than 7,000 views of the concert from 48 countries. Responsible drinking messaging was visible more than 17 million times across all media platforms and after completing the quiz, 90% of people said they knew more about alcohol and its effects on the body.

DRINKiQ is Diageo’s global resource to help people make responsible choices about drinking – or not drinking. The website, DRINKiQ.com, gives information on alcohol and its effects on the body, along with a range of resources to encourage moderate consumption

We Are All Able: employees driving progress through inclusion 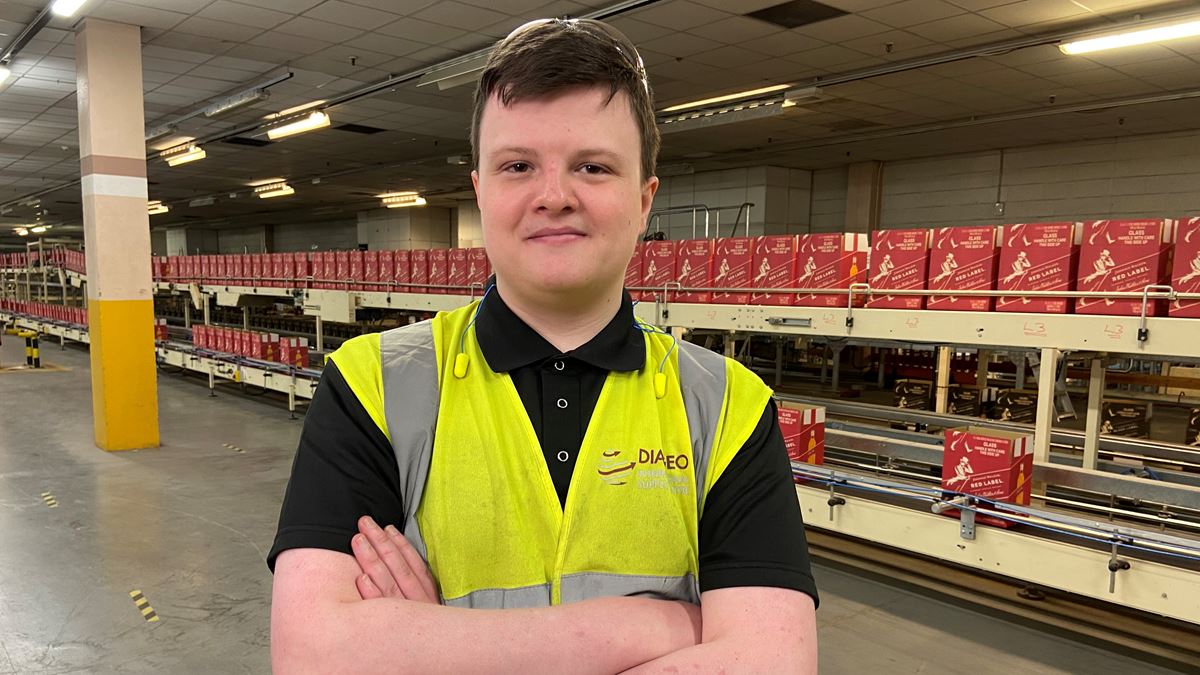 One of our interns at Shieldhall packaging site in Scotland

We've set out to champion inclusion and diversity as one of the central aims of our Society 2030: Spirit of Progress ambition – and our employees are at the heart of driving change. One of the ways our people can make a difference is through our Business and Employee Resource Groups around the world, where employees can start thought-provoking conversations and introduce initiatives to create a sense of belonging and opportunities for all.

Creating opportunity for people with disabilities

The We Are All Able resource group is a great example. At our Shieldhall packaging site in Scotland, We Are All Able saw an opportunity to build a more inclusive workplace by introducing an employment and development programme for people with a disability. The award-winning ‘We Are All Able’ initiative has created three six-month internships for registered disabled workers which are tailored to each employee’s physical, mental and workplace needs. Supported and paid for by the government-funded employability agency, Fair Start Scotland, in 2021 the ‘We Are All Able' programme began recruiting for its second intake of interns.

Ensuring all 400 Shieldhall employees understand what it means to be disabled has been crucial to the success of the programme. In partnership with Enable Scotland, the We Are All Able team has delivered a series of training courses covering topics such as autism awareness, sensory impairment, and assistive technology.

In 2021, Shieldhall was awarded an Inclusive Workplace Award through the Scottish Union of Supported Employment (SUSE).

Hear from our Shieldhall team and find out more about the ‘We Are Able’ programme here.

For 75 years Uganda Breweries has stood for innovation and inclusivity. Our brewery in Kampala, Uganda has been sourcing, brewing and selling locally in Uganda for three quarters of a century. Not only that, but Uganda Brewery’s Port Bell Brewery has been fostering talent for our industry throughout that time. Bringing women into a traditionally male dominated industry – from women farmers producing the grain for the beer, to women technical plant operators and managers in the brew teams through to women in commercial and sales roles. UBL believes it is a business for everyone which respects everyone.

This year UBL celebrated female brewmaster Shalom Kaite who managed to sail through her brewmaster qualifications, even with the complications of Covid and is now back busy on site at Portbell Brewery in Kampala, having also decided to take two of UBL’s iconic brands Portbell lager and Uganda waragi gin up over 5000m to the top of Margherita Peak. 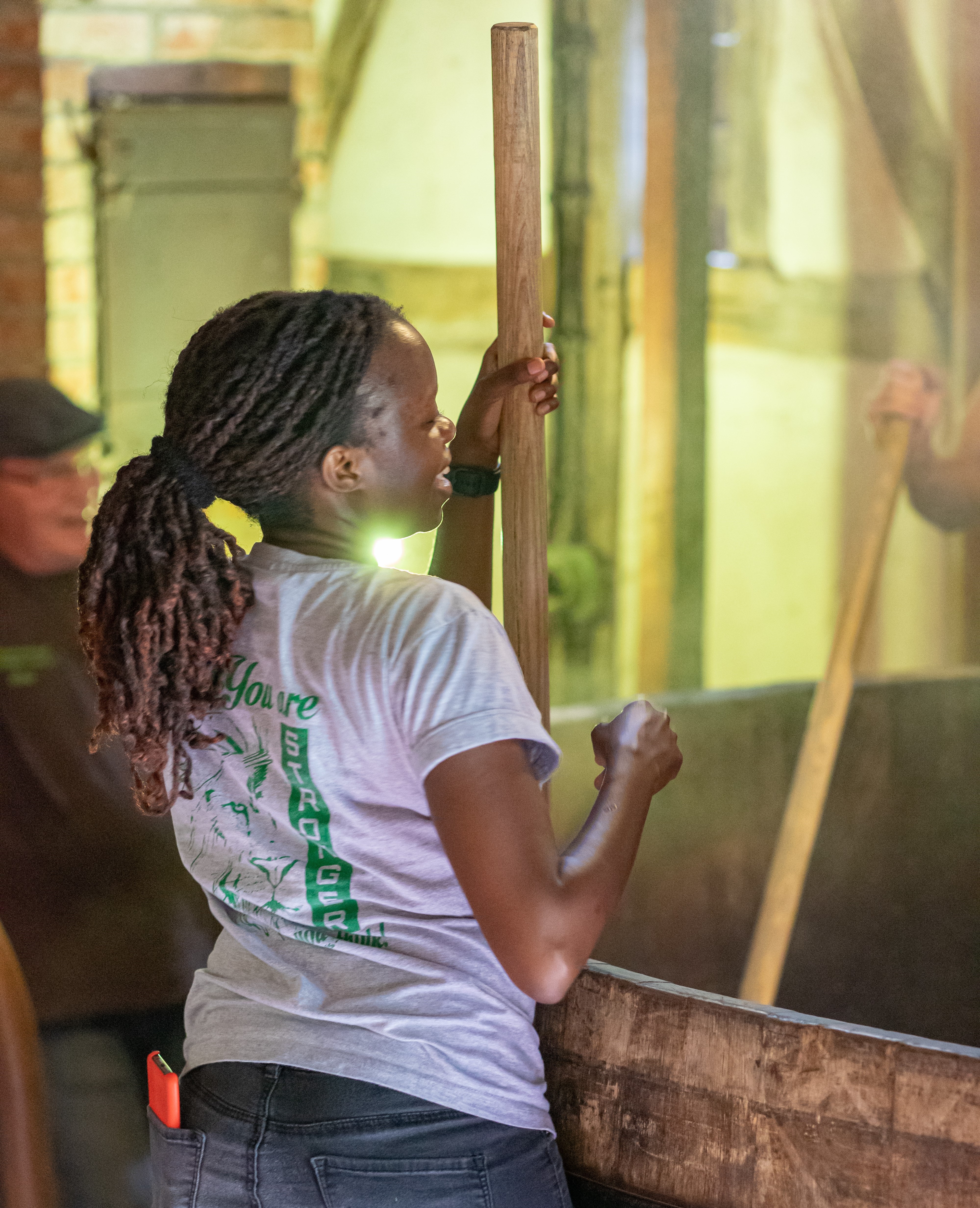 Now in its 76th year the team have been talking to Marion Muyobo and Mama Marion, former senior leaders in marketing and corporate relations who helped put UBL on the map and represented women in the business decades ago.

Respecting and inspiring everyone Uganda Breweries is proud of its 75-year record in brewing in an inclusive way with a diverse team of people. 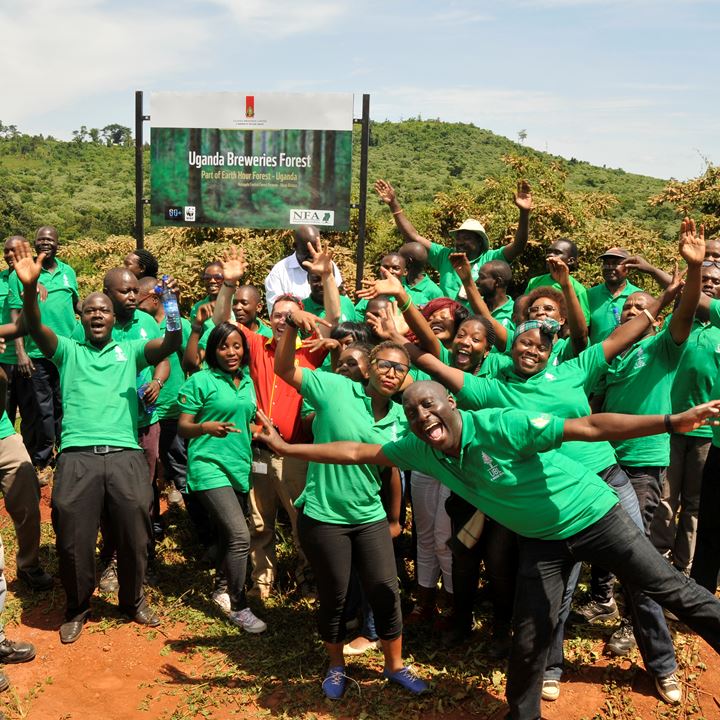 Across our African markets, Guinness has a special partnership with football. It is a trusted sponsor and participant in the ‘beautiful game’, supporting the teams, games, referees and fans which bring it to life.

This partnership has taken many guises over the years, most recently with the dynamic Guinness Night Football 5- Aside international African tournament which saw teams from Kenya, Cameroun, Ghana, Nigeria and elsewhere compete in evening matches brought to life in colour in a new night time setting. It has also seen Guinness support female football and those characters both playing and refereeing matches in Kenya and Cameroun.

In Cameroun, Guinness is a supporter of the ‘lionesses’ the national women’s team, seeing them go from strength to strength in recent years. This has driven a desire to do more and build the support needed for a national league. With this at its heart the Guinness Super League has been created in the country. A new women’s football tournament to excite a passion for women’s football all over Cameroun and further afield.

As part of this Guinness Cameroun has created a brand new campaign entitled #HerHomeAdvantage, showcasing one of the women players from the Super League and how, through her utter passion and commitment to her football, has garnered the same from friends and family; who now not only understand her dedication to the game, but come along to support her at the matches.

In Cameroun Guinness and football come together to support, encourage and build platforms for men and women to play, watch and enjoy football, showcasing the talent of both genders and what that talent can bring to the continent and its footballing future.

Raising the Bar: our $100 million commitment to helping hospitality recover 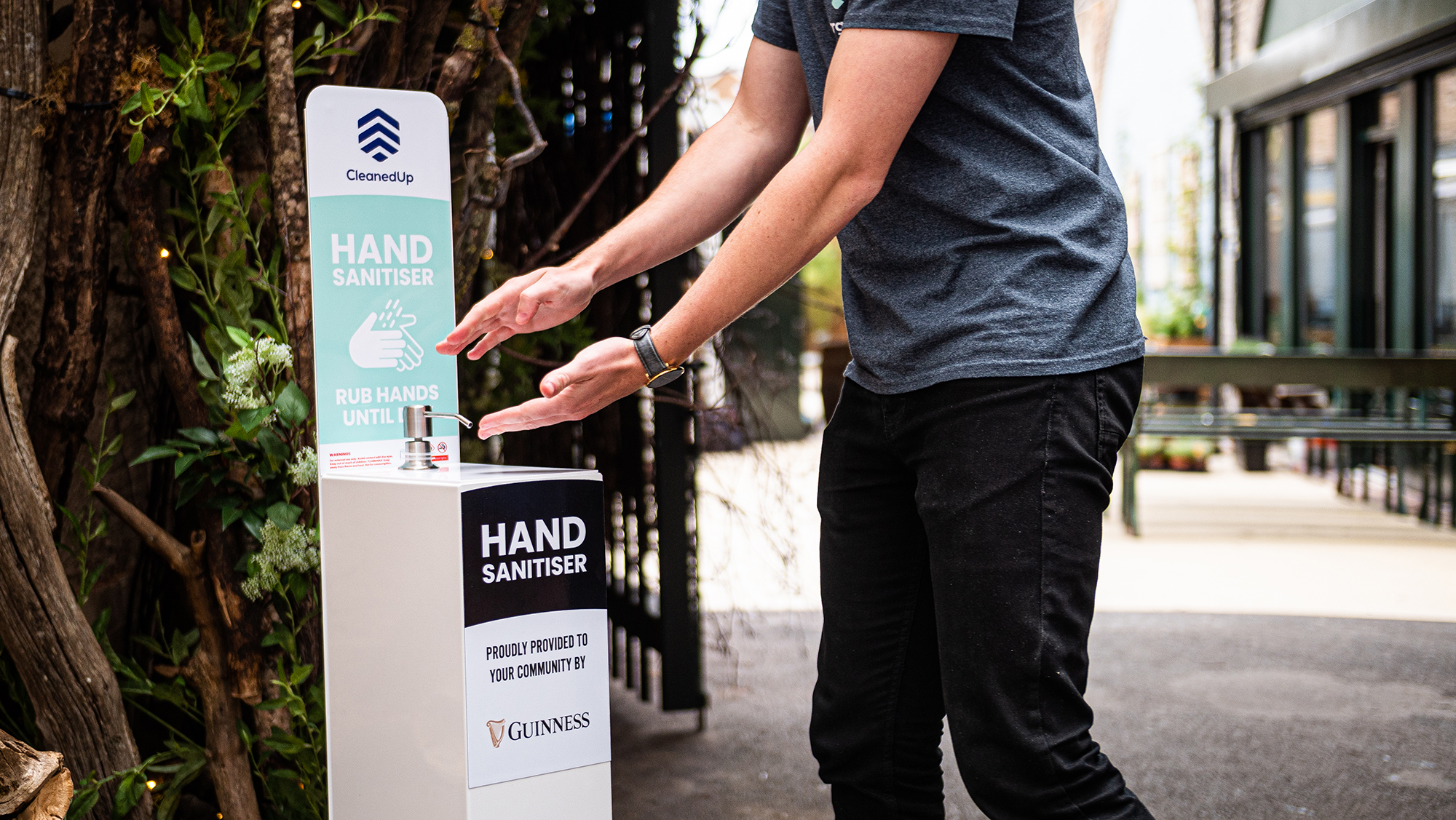 One of Diageo’s Raising the Bar hygiene and sanitation kits

The Covid-19 pandemic has hit many of our stakeholders hard – and we've kept up the momentum of our work to support them. In addition to our immediate steps to donate masks, hygiene products, and alcohol to make more than ten million bottles of hand sanitiser, as well our initiatives to help employees and suppliers, we made sure we supported the hospitality workers and owners who play such an important part in their communities, and for our business.

Reaching thousands of bars, restaurants and staff – and their local economies

In June 2020 we launched our $100 million Raising the Bar commitment to support the recovery of the hospitality sector around the world. The programme has already reached over 39,000 venues with support such as hygiene and sanitation kits, furniture for outdoor spaces and solutions for table reservations and contactless ordering.

We're also supporting people through training and resources. We have trained over 37,000 bar staff on Covid-19-related protocols to ensure safe operations. Our Diageo Bar Academy is also helping bar owners and staff with training and content – a record 1.6 million people used its resources this year – and has added extra support for the mental health of bar employees during times of crisis through www.DBA.com.

A global approach, with a focus on the underrepresented

Raising the Bar is tackling the immediate issues facing hospitality all over the world – and it is also supporting work to strengthen the sector in the long term through inclusion and diversity. Diageo North America, for example, has placed a particular focus on small businesses in at-risk communities, as well as supporting 25 Historically Black Colleges and Universities with $10 million lifetime endowments for scholarships and grant programmes.

In India, we pledged £4.5 million to provide infrastructure and equipment in support of the Covid-19 response, and Raising the Bar has supported 1,500 outlets and trained over 3,000 bar staff. In Australia, we've supported over 1,500 businesses, and reached over 4,500 people through Covid safety related training. Programmes are underway in Brazil, China, Kenya, Mexico, Uganda and the United Kingdom, among other countries.

Keeping the Lights On – supporting pubs in Ireland

In Ireland, as Christmas 2020 approached with pubs still closed, Guinness launched #KEEPTHELIGHTSON, which invited consumers to embrace their local pubs and pay a visit when they re-opened. On 20 November 2020, beacon pubs across Ireland simultaneously switched on their Christmas lights in a show of unity and to highlight their readiness for a safe reopening – a campaign captured in our film, which you can watch here. 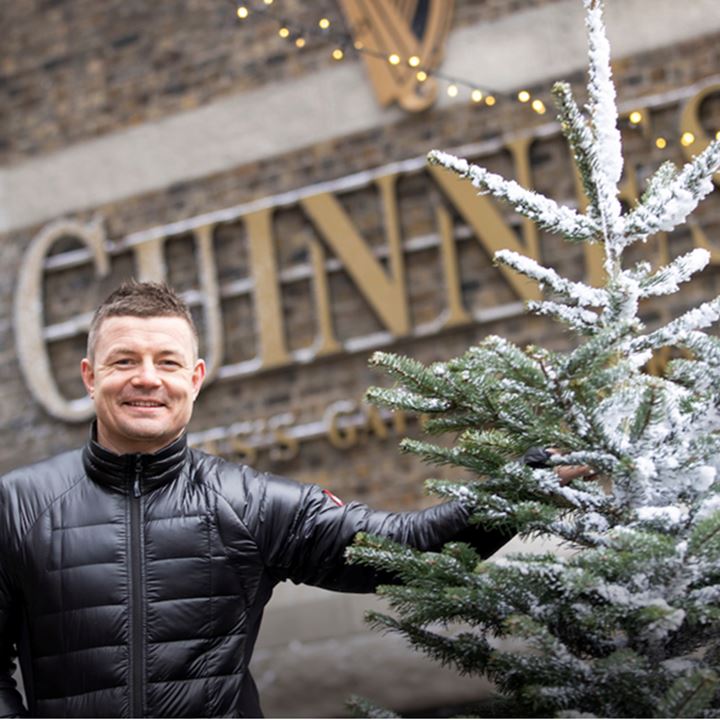 We're always looking for ways to cut back on waste – it is an essential part of our ambition to become sustainable by design. So when pubs had to close during the Covid-19 pandemic, we moved fast to make sure that millions of pints of undrunk Guinness didn't end up poured down the drain, potentially causing problems for wastewater systems and wasting a high-quality, valuable resource.

We decided to collect any unsold kegs and put the beer to good use – including as a fertiliser for Christmas trees and willows, which got the benefit of the beer's rich organic content while giving us the reassurance that it was being disposed of responsibly.

It was a huge operation – we took back more than 500,000 kegs from Ireland and 100,000 from our big overseas markets – but it had an environmentally happy ending. The beer that was not used as fertiliser went through one of two other environmentally sustainable channels: either for compost, or for use in an anaerobic digestion facility producing biogas as a replacement for fossil fuels.